Havana is quickly becoming one of Latin America's pre-eminent street art destinations with a nucleus of established contemporary artists immersed in an art community that is both educated and full of youthful vigor.

The other factor that makes Havana street art especially appealing and stimulating, is the setting which supplies the canvas for the art works. The buildings of Old Havana and Central Havana are enchanting both for their vintage architecture and state of decay. Practically everywhere is a "living space" inhabited by the people of the city going about their everyday lives who themselves, along with the buildings, become part of the art work.

How to get a feel for the street art in Havana?  Meeting the artists is a good starting point! 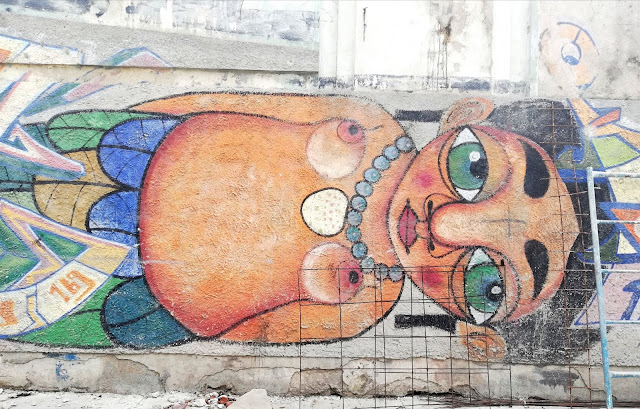 The artist started our conversation with this phrase. Sounds pretentious? It could be! Not if we're talking about Victor Mora though.

Without exaggerating, I found him to be one of the most interesting and charismatic people I have ever met. The award-winning plastic artist, world renowned for his works displayed on murals, art galleries and hotels throughout Latin America and Europe, is a simple and generous artist who puts his heart into his work. He declares that his characters are like a self-portrait with a lot of expression, character, identity, and color that help fill the environment where he is with color and good vibes. 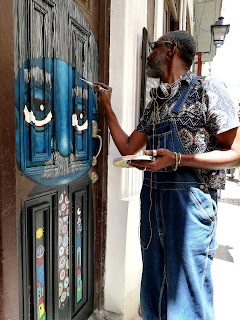 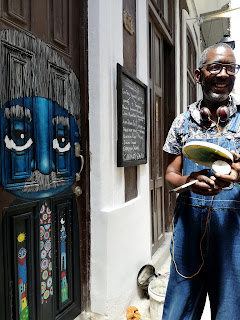 He began painting at the age of 10 and at the age of 13 entered art school, majoring in architecture at the University of Santiago de Cuba. When he realised his destiny was in painting he began to create his own style that nowadays can be easily identified when you walk through the streets of Cuba.

His characters have very specific traits such as the big nose and eyes which I could identify as a theme with traces of people from yesterday, today and tomorrow.
Yesterday: Indigenous
Today: Black
Tomorrow: Mixed Race 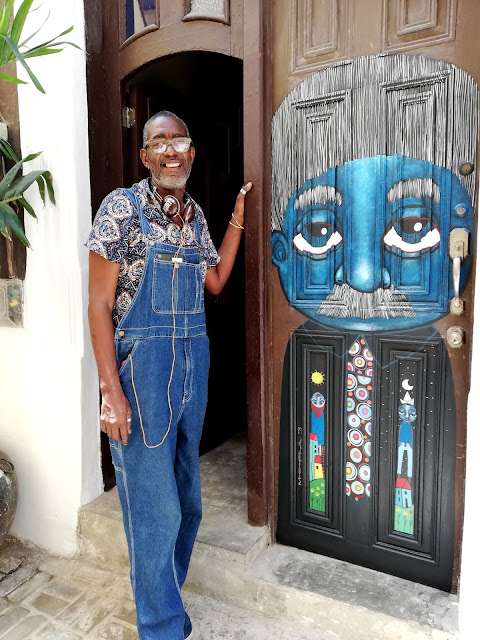 The artist believes that art has to be for everyone, but unfortunately today the access to art is for only some, even the artists themselves who, to exhibit their work need to have more than just art!

Victor has traveled to many countries taking his art with him and believes that Latin America still has much to offer the rest of the world. “Latin America is a source of much art. We are very rich culturally; varieties of religions, musical rhythms, color, flavor, sun, salt, passion ... with that we create very talented artists ”.

What his ambitions are? Nothing grand, just to live to 100 continuing to do what he does now - painting. 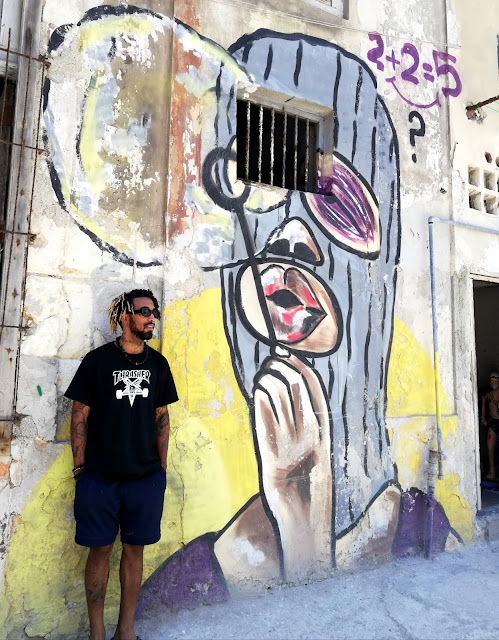 One of the most well known graffiti artists in the underground scene in Havana - Fabian brings to the streets of Havana his persona who represents more than his thoughts but strong characteristics of his community (Centro Havana).

Fabian comes across as a gentle and sensitive person with a keen perception and who conveys in his art a system that he sees as being "weak". Due both to the consistent distinctiveness of his style and the ubiquitous nature of his art works, to some degree or other, and in different ways, Fabian has been able to have an affect on just about everyone in Havana.

Fabian started to produce graffiti actively in 2015, but the artist has drawn since he was a child.  According to himself he created the symbol 2 + 2 = 5 when the teacher asked his class what the answer to 2 + 2 was and his friend answered "5". He thought that this was hilarious but later realized his friend's comical error could have several other symbolic meanings. He likes that there is no definitive significance leaving people to deduce the meaning for themselves.  Fabian left the formal school system in adolescence because he did not feel part of the system or did not understand it - this being his own personal relationship with the symbol 2 + 2 = 5. 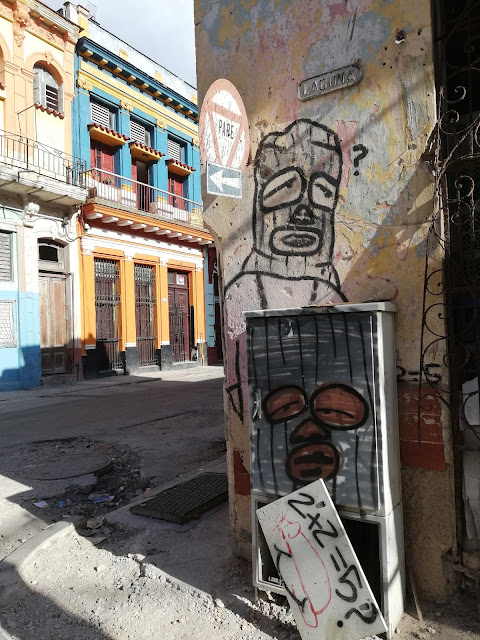 The main character or persona of his work is named "SuperMalo" who represents himself the "creator" or anyone who does not fit into this dictatorial society. And because his character wears a hood, he believes he can say what he thinks and what he thinks is right or wrong without any authority or person identifying him. “This character is for any of us who are ashamed, afraid or have learned throughout life not to argue against but to walk according to society or a system. 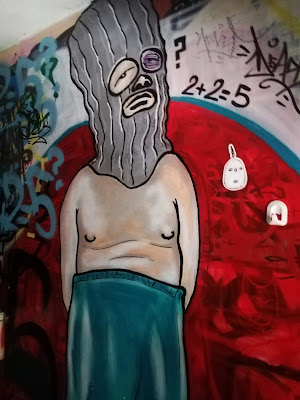 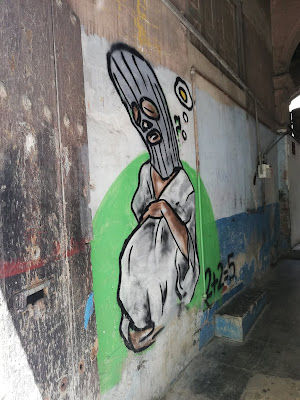 He only finished elementary school because Cuba obliges all children to do so. Despite the fact that the university in his country is free, he still has not been able to study art, but he sees that he is a natural artist.

When I asked him, what do you expect from your art?
He hopes that more people in his country will have the freedom to express themselves through art and perhaps his work will be recognized as art. 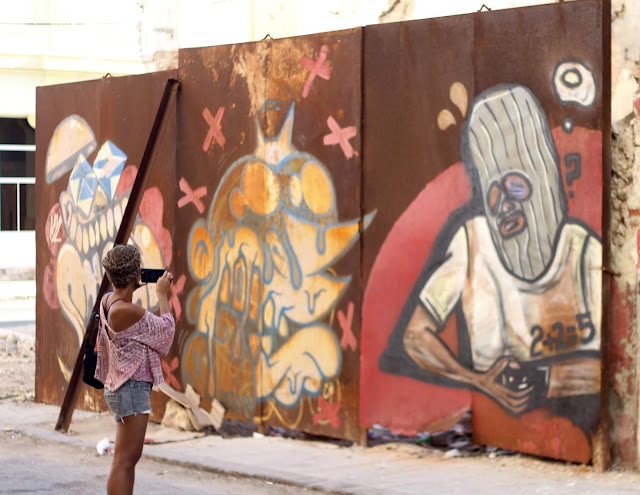 Gabi started painting in 2014 but she was already doing her drafts inspired by her father who is a cartoonist. Like so many other young people, she couldn't imagine that art can become a career for life, but the artist now declares “I found myself in the art of painting, I know this is what I want to do for the future, even though I haven't studied formally". But yes, she thinks every day about how to improve her techniques. 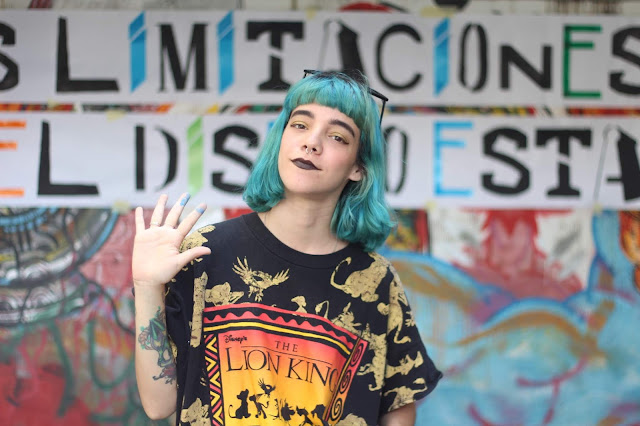 The artist was not the first girl to graffiti on the streets of Havana, before her others like KK, Sesi, and Fulana already make the city their open sky studio.

Gabi tells me that even if the female core is small they have a lot of expression in the streets and also the support of male artists who are already known in streets of Havana and who help source materials such as paints and spray products that are very difficult to get in Cuba. Gabi laments, "unfortunately, female artists don't get along with each other" thus creating a certain rivalry between them!" The artist believes that collective work enriches everyone but it seems that the female veterans do not think the same and prefer to work alone or in partnerships with male artists. 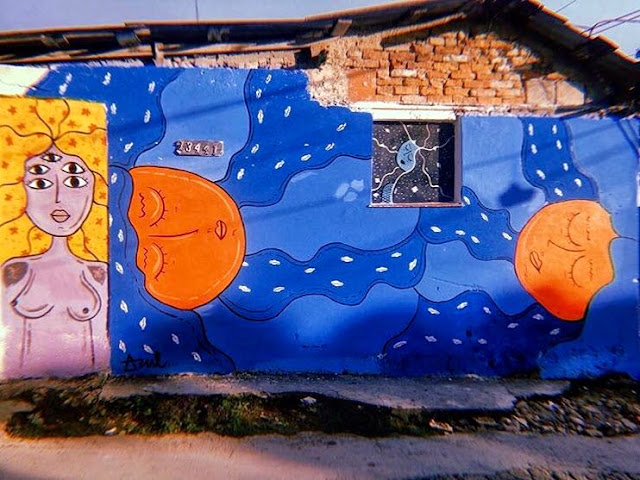 For the future Gabi hopes that in Cuba the graffiti artist will be recognized as an genuine artist just working in a different medium.

The artist reveals that she has already been taken to police stations and been fined for graffiti, but she sees hope for the future! She told me that there is a wave of new artists at various levels such as underground and private galleries, tattoo studios ... coming from people of various tribes in the city's cultural ecosystem.